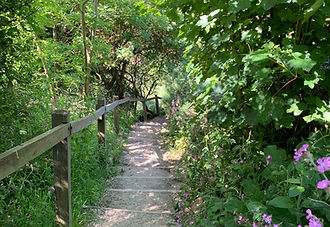 I’ve just come back from a cycle ride. I’ve been based in Bridlington in the
East Riding of Yorkshire since lockdown, and it’s had an effect on many
things.

I have for the first time seen spring in the countryside and by the sea from
beginning to end. I have seen wild flowers from their green shoots, through
exuberant flowering to their final expiring on the banks at the side of the lanes.
Taking the dog for a walk in the nature reserve at South Landing,
Flamborough, a few miles from our flat, has meant we have seen the trees
move from bare branches to almost full-leaf. In the last few days butterflies
have started to appear in more and more numbers, Orange-tips, Red
Admirals and Woodland Brown. We have found ourselves among the trees
stunned by the variety and beauty of the birdsong. And then climbed down
the steps to the little beach and the sea where the lifeboat station is, and
where many of the poems in my last collection, ‘A Bench for Billie Holiday’
began.

And it’s completely shifted the focus of my recent writings. I had thought I
was writing about the city, my living in Leeds for almost fifty years, but actually
those urban sonnets have been counter-balanced by many poems celebrating
the wonders of the natural world, the deer glimpsed moving through the
woods, a hare running across a meadow and this morning a fox joyously
springing around in a field as it hunted a small animal.

My city stories now a strong flavour of country songs. And I’m looking for a
title to wrap them in. All suggestions gratefully received.