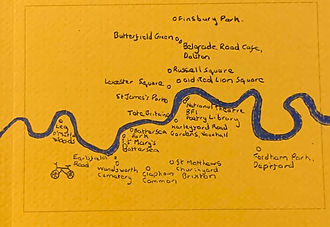 Sometimes a book just chimes with your own experience and you read it at the perfect time, so Reuben Lane’s book featuring the oases to be found in a cluttered, messy and gorgeous London, resonates with my own recent explorations of my adoptive city of Leeds.

Written in a loose, diary form, and taking place over four months, he has collected a series of vignettes showing the unexpected beauty to be discovered, often hidden from general view, where he can write, contemplate and observe.  And how beautifully observed it is.  So from a piece about Clapham Common,

‘This version of the soul plays its part after dark on the Common. The line of epiphany trees that cloak the footpath from the bandstand to the top of the long hill that leads down to Battersea’.

On the front of this rather beautiful book is a sketch map of key places in a city and a life.  I was immediately tempted to chart my own Leeds life in the same way.

But more than anything by the end of ‘Freedom of Movement’ I felt I had made a new friend, a travel companion I would love to accompany again in the future.

You can buy your own copy, from Gay’s The Word, 66, Marchmont Street, London WC1 1AB

Reuben Lane lives in London where he grew up. He moonlights working in theatres and cinemas in the evenings, allowing him the daylight hours to wander, walk, cycle and write. Reuben’s short stories have been published in the film journal ‘Vertigo’ and  in anthologies, including ‘The Time Out Book Of London Stories Volume 2’ and ‘Pretext Volume 1’ from UEA. Reuben’s debut novel, Throwing Stones At Jonathan (Pulp Books) was shortlisted for the Waterstone’s Mardi Gras Prize for best LGBT work of fiction.

‘Freedom Of Movement’ is a self published booklet of narrative non fiction with flashes of fiction written and set during the autumn and winter twelve months ago.