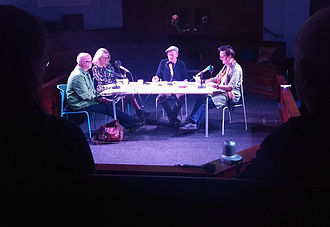 I have been involved with a lovely project these last few months celebrating fifty years of the twinning of the German city of Dortmund and Leeds.  The demon-organiser Peter Spafford who presents arts programmes [amongst many other ventures] at the iconic Chapel FM teamed up ten Leeds writers and ten of their Dortmund counterparts to share their writings and with the help of translators to turn them into poems and pieces in the ‘other’ language.

My poet was the irrepressible Thorsten Trelenburg, my translator Oliver Lawrie, a student of German [and diplomatic tact] at the University of Leeds.

The theme we were working with was ‘neighbourhood’ and it was immediately fascinating to see how Thorsten and I interpreted this idea.  For Thorsten it clearly had European dimensions in the light of the current situation. For me already embarked on poetry celebrating the city I’ve lived in for nearly fifty years, it was much more an exploration of the neighbourhoods of urban life.  To add to the challenge I tend these days to write exclusively in the Shakespearean sonnet form which to put it mildly might offer quite a challenge to the translator who wants to convey the flavour of the original form as well as the words.

The next month or so saw us exchanging writings and then working on our versions of our partner’s poems.  Oliver was my continuing support here, able to give advice on tone and intention in Thorsten’s very amusing pieces, and helping me get it closer to the original poems.

Then this Wednesday I appeared in the first of two programmes celebrating our collaborations.  Peter Spafford held the whole thing together with immense skill and charm in the face of some technological meltdowns and I sat open-mouthed at the power of the poetry and the skill of the translators.

The wonderful Barney Bardsey, another of the Leeds writers involved, read her own work and we both shared some of the  poems of  Zoe Carty and Jo Brandon who could not be there. We  were much aided Nicola Good, German teacher from Benton Park School, who gamely allowed herself to be hauled from the live audience to read many of the German texts for us.

For a close up of the work and collaborations:

And to hear the programme: